I'm back. It was fabulous, and of course exhausting. No, we did not dance on Le Pont D'Avignon, nor did we record ourselves singing the song on a DVD to take home with us. But we saw Salins du Midi's salt pans at Aigues-Mortes, the Roman theatre at Orange, the Roman arena at Nimes, a very well-appointed museum of modern art at Bagnols-sur-Cèze, and a mad mad Provençal print cloth shop in Aix-en-Provence which I had vowed to bring my mother to when I saw it in 2005. I bought so much cloth for tablecloths that I had to mail it to myself. I'm hoping Scouse Doris will help me sew them all.

Good times: listening to the England vs. Tonga match with my father on his tiny transistor radio 1930s stylee, eating fabulous prawns with aioli sauce, rich stew made from a fighting bull calf with saffron rice, fabulous.

I'd tell you more, but I'm sorry, the rugby's on, Ireland versus Argentina, and it promises to be a humdinger. And may I say, the best of Irish luck to a fellow home nation. Wager, anyone? I thought not.
Posted by Aunty Marianne at 7:42 AM No comments:

Tomorrow I will be taking a train to....

I am going to meet my parents and spend a week chauffering them around Provence. Parents are for spoiling, while you can.
Posted by Aunty Marianne at 11:08 AM No comments:

Email ThisBlogThis!Share to TwitterShare to FacebookShare to Pinterest
Labels: travel

Tonight I will mainly be eating....

Posted by Aunty Marianne at 10:07 AM No comments:

I went to a course today on something very boring and financial. At the beginning of the day's labour, the teacher asked us all whether we were sure we were all in the right course. "Yes, yes, Financial whotsit whotsit, room 3.6, that's us".

Then he made us sign the register. One gentleman noticed he wasn't on the list. Was he still sure, the teacher asked, that he was in the right course?

"OK" said the teacher, "there must have been a mixup, add your name on the list, the more the merrier". And he started the course.

After about 15 minutes of being led by the nose around the financial car crash of CapGemini's 2003 accounts, the unlisted gentleman lifted his hand. "Excuse me, but I think I'm in the wrong course."

"What course are you supposed to be in?" we all asked.

It took a while to restore order.

We subsequently discovered that several people had been turned away before any of us had turned up. We think the assertiveness course people deliberately give students the wrong room number as a test of just how much work is needed.

Email ThisBlogThis!Share to TwitterShare to FacebookShare to Pinterest
Labels: a good laugh

1) I've just sat down to blog after a weekend away, and there are traces of chocolate on the white paper we run the mouse on.

Scouse Doris, you are officially busted.

2) It is only when you take your two-year-old relative to a sandpit, and then bring him home, feed him, put him to bed, and then undress for a shower, that you fully learn just how much sand you can carry in your bra without noticing.

Posted by Aunty Marianne at 8:04 AM No comments:

Email ThisBlogThis!Share to TwitterShare to FacebookShare to Pinterest
Labels: a good laugh, kids, Stuff that ticks me off

Matchmaker of Capitalism and Conscience. Posted by Aunty Marianne at 11:53 PM No comments:

Email ThisBlogThis!Share to TwitterShare to FacebookShare to Pinterest
Labels: obits

On another much more interesting note, the rugger world cup has started, and I am in heaven. Big, burly blokes scrumming about all over the place, it all looks horridly violent and then you look at the action replays and you see the ballet of 110-kilo men being lifted into the air for the line-out, the care taken in a tackle to bring the opponent down without hurting him, the way that, in a well-honed team, as he is tackled a player will pass the ball to a team-mate he cannot see but whom he knows is there. You start watching for the eye candy, you keep watching for the beauty of the game.

Last night, in the Stade de France, the French hosts opened the tournament against the Argentines. For reasons probably linked to Laporte seriously underestimating the opposition,

they left the terrifying Chabal, whose aspect alone could floor you if you were feeling a tad vulnerable, on the bench until it was WAY too late. La Honte Nationale. As a result, Argentina gave France a wrist-slapping, which will provide me with plenty of ribbing material at work on Monday. As will New Zealand's trouncing of Italy, an up-and-coming rugby country that should have been able to put up slightly more of a challenge. Although I have to say the All Blacks are VERY fit.

That is, if my own country manage to avoid pulling defeat from the jaws of victory again, and survive the unpredictable onslaught of the USA. If not, I shall be taking down the Jonny Wilkinson picture I have put up on my office door and keeping very quiet. Yes I know he's injured and so not playing until later. I just think he's pretty.
Posted by Aunty Marianne at 6:19 AM No comments:

Email ThisBlogThis!Share to TwitterShare to FacebookShare to Pinterest
Labels: rugby

My favourite cover band, Take This, are playing.

Be there or be somewhere else.
Posted by Aunty Marianne at 10:00 AM No comments: 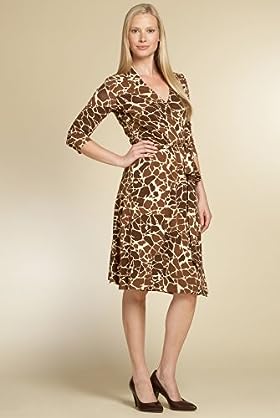 I may be going to a barbecue this afternoon if the weather holds.

If so I will be wearing this very reasonably priced Marks and Spencers giraffe print dress.

It looks like absolute rubbish on the hanger, it looks OK on this model but, because we fill it out better and in all the right places, it looks AMAZING on curvy ladies. Especially if they've judiciously taken Daphne Wayne-Bough's advice and purchased a serious pair of foundation garment knickers. I tell you, when it comes to self-confidence and taking control of her life, a woman can do a lot worse than get her underwear sorted out.
Posted by Aunty Marianne at 2:55 AM No comments: